Q&A With Our Very Own Megan Kobar

Hailing from Calgary, Alberta, Megan Kobar is a member of the Source For Sports family, and has been playing hockey since the age of 6. Growing up surrounded by the game, Megan was inspired to start her own hockey career after having watched her dad and brother play as a young girl. Little did she know just how much hockey would add to her life.

Megan’s hockey career took off playing Midget AAA girl’s hockey in Calgary and attending the National Sport Academy for high school. She attributes many of her skills to the NSA as their focus was to prep their students for college, both on and off the ice. Megan had the opportunity to play with talented players around the globe for various tournaments and showcases. One of her favourite high school hockey opportunities was playing in the Mac’s Midget Tournament for three consecutive years. This was a dream for most young players in Calgary, and despite losing out to Notre Dame prep 2 out of 3 finals, Megan has very fond memories of participating in this prestigious tournament that has so much history in her hometown. As a hot spot for recruiting female hockey players for college teams, Alberta’s hockey community afforded Megan the chance to play in front of coaches and recruiters from many different schools. 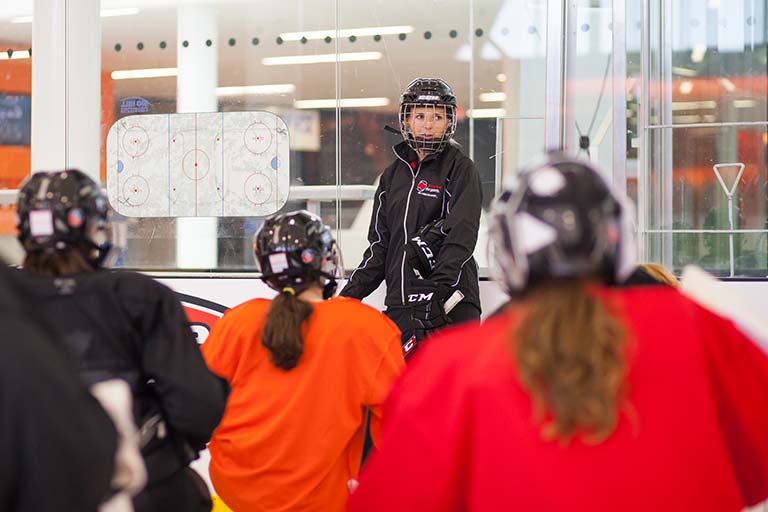 Megan’s dedication, hard work, and passion for hockey ultimately led her to being recruited to play for RIT (Rochester Institute of Technology). With friends on the team, a positive reputation, and a head coach Megan respected, the decision to become part of the RIT hockey program was an easy one. Along with the chance to play elite level women’s hockey for four years at RIT, Megan earned her Bachelor of Science degree in Psychology and a minor in Business Administration.

Today, Megan plays hockey in the Southern Alberta Women’s Hockey Association alongside former women’s college hockey players. She’s also been working alongside her dad for the past few years to help run Adrenalin Source For Sports in Calgary. We asked Megan a few questions about her hockey career and what the game has taught her over the years. Here’s what she had to say. 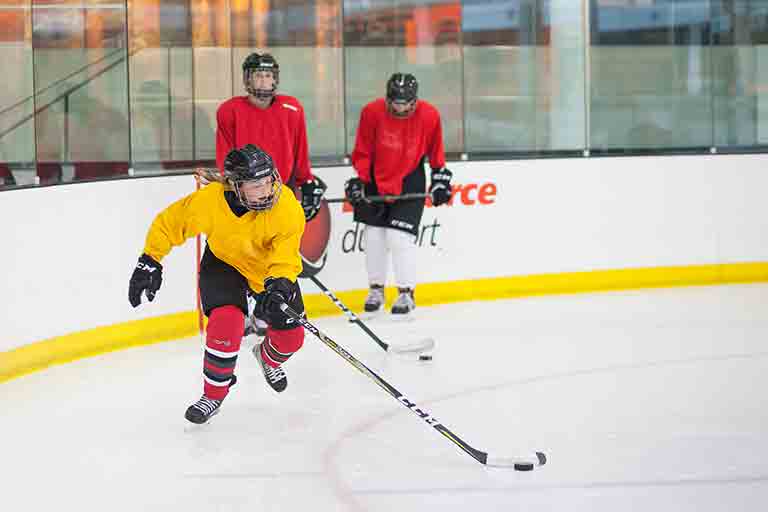 SFS: What was your favourite part about playing on the Women’s Hockey team at RIT?

Megan: RIT had an unreal fan base, and the rest of the school really supported both the men’s and women’s teams. I can’t imagine there being a better college atmosphere to play in. The training facilities were also second to none. All the athletes were treated as professionals and were given all the tools to grow and succeed.

Megan: Hands down, winning the National Championship my senior of college year at our home arena. 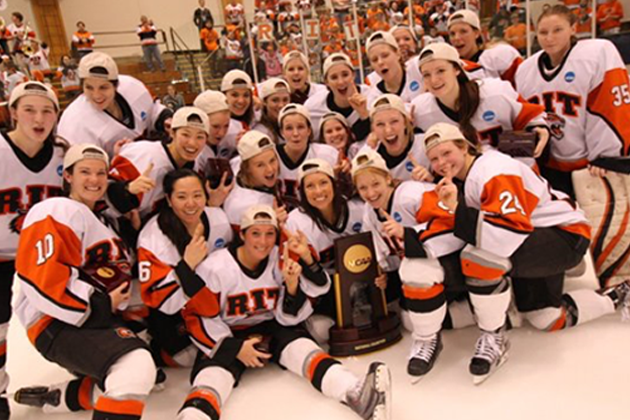 SFS: How would you describe your nicest goal and assist over the years?

Megan: The nicest assist I’ve ever had was going down on a 2-on-1 in the semi-final in over time to get us to the final in Mac’s Midget. I was absolutely exhausted carrying the puck and shot it perfectly off the goalie’s low pad – it rebounded directly onto my teammate’s stick and she tapped it in. Nicest goal would’ve been in the NCAA tournament my junior year – it was a garbage goal, but nothing compares to hearing 2000 people cheer after you score in a big game.

SFS: Who’s your favourite female hockey player and why?

Megan: Probably Marie Philip Poulin. Not only because of her unreal performance at the Sochi Olympics, but because she’s such a hard worker. You never see her take a shift off. She’s super modest and one of those silent leaders who leaves it all on the ice.

SFS: If you had to pick 3, what would be the most valuable lessons playing hockey has taught you?

Megan: Over the years, hockey has definitely taught me the respect and teamwork that needs to be in place in order to have a successful team. When you have 20 different opinions sitting in one room, it is vital to have an open mind and collectively agree on a common goal. It has also taught me how important it is to work hard and go the extra mile in order to set yourself ahead. Whether it’s the extra workouts, the additional training sessions you pay for, or the 2 extra hours you spend at the library, that’s what’s going to differentiate you. Lastly, I would say it has taught me to be passionate in whatever I do. Whether it is in my career or sporting events I have participated in post-college, I think you should absolutely love the atmosphere you are placing yourself in or get some satisfaction out if it.

SFS: As part of the Source For Sports family, how does having played at a high level of hockey impact the way you interact with our customers?

Megan: I think you have a different appreciation for a product or technology on the market that you think will advance or elevate the game. It’s not hard to get excited about these kinds of products, and that excitement can definitely transfer over to the customer. Especially because as Source For Sports members, we get the opportunity to test out new products at our on-ice Demo Days each year which allows us to give our customers experience-based information about the feel and performance of different equipment. Having played at many different levels, it’s also easier for me to help a player understand what level and model of skate is right for their game as well as the importance of a proper fit.

SFS: What would you say to young girls to encourage them to sign up in their local hockey league?

Megan: Playing girls hockey can offer a lot of unique opportunities like travelling to different tournaments across the world, making lifelong friends, and going to university in a different country. Hockey is a game that teaches you so many valuable life lessons, and gives you the chance to experience a team atmosphere. You also automatically gain 20 new friends who will help you create memories that will last a lifetime! 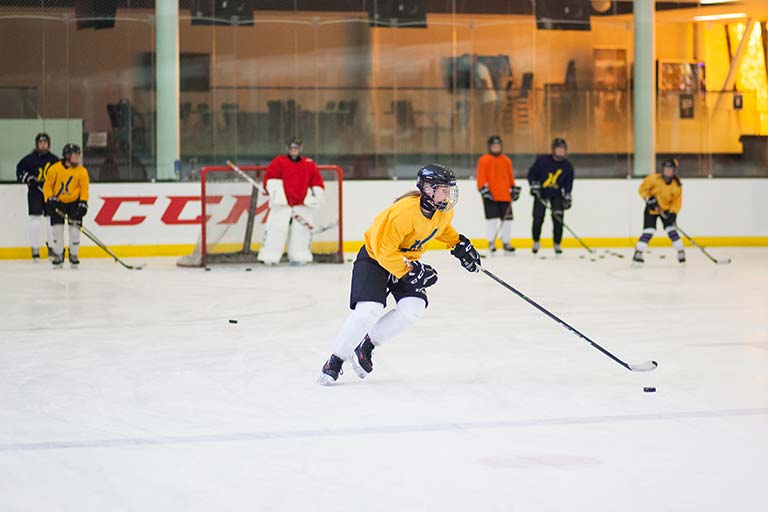 Megan is one of many examples of the experienced hockey players we have working within the Source For Sports community. With a love and knowledge of the game, she helps customers pursue their own hockey dreams by getting them in the gear that’s right for them.

Megan knows her stuff. And at Source For Sports, we know our stuff, too.

Get to know your local Source For Sports staff who's there to elevate your game.

Source For Sports. We Know Our Stuff.

How To Fit Hockey Shinguards

Hockey shin guards are designed to protect a player’s legs from pucks, slashes, impacts and skate blades, and are an important part of the complete protection series.

The new Bauer Supreme 1S hockey skates are designed for lightweight comfort and a custom fit.

Based off the CCM Ribcor 66K skates, our Source Exclusive Ribcor Titanium hockey skates are improved with features from the highly regarded Ribcor 70K skates.

Our hockey professionals test the product so they have hands-on experience for when you need advice.

How To Fit Hockey Shoulder Pads

The right shoulder pads to elevate your game will allow you to move easily and be protected on the ice.

Built for the sharpshooter, CCM’s new Ribcor Trigger 3D PMT hockey stick will have the goal light going in no time.

Designed to meet the specific needs of active children, Jupa fabrics are tested to prevent abrasions, tears, fading and to be machine washable. Outerwear is waterproof, but also breathes well during physical activities.

Source For Sports has worked in collaboration with Bauer to design five Source Exclusive Bauer skate models that include numerous upgrades for a higher quality skate at a lower price.

Depending on the league, parents may be asked whether they are registering their child for play in a competitive league representing the city, or for fun playing within the community.