NHL Hall of Famer, 6 time Stanley Cup Champion and 7 time Vezina winner Jacques Plante whose National Hockey League career spanned 28 years is considered one of the most important innovators in the game.  In a time when goalies wouldn’t dare to wear a mask for fear of being branded as a coward, Plante went against the critics and introduced the first homemade goalie mask after taking a puck to the face against the New York Rangers. This homemade mask was made of fibreglass cloth and polyester resin, which had a general mold of Plante’s face. To head coach Toe Blake’s chagrin, Plante continued to wear the mask even after his face was healed, which led to an 18 game winning streak for the Canadiens. When Blake insisted that Plante not wear the mask, the Canadiens lost to Detroit 3- 0, after which Plante continued to don his mask for every regulation game.  That year the Canadiens won their fifth straight Stanley Cup, and the goalie mask started to become part of the everyday equipment for goalies.

Improvements to the Mask Design

The initial mask design provided little protection to the eyes and did not dissipate heat very well. Improvements sparked a second innovation, known as the “Pretzel Design”. This model featured fibreglass yarn material that was shaped into bars that contoured the goalie’s face. With consultation from engineers, the design put ridges into the mask to allow pucks to glance off the helmet when struck and dispense the energy. Soon after, Jacques Plante began the Plante’s Fibrosport Company where he could mass-produce his mask designs and sell them to goaltenders all over the country. These custom-fit masks stretched not only to the professional level but to amateur and minor hockey associations as well. Team trainers were then relied on to ensure the mask had a custom fit to the player.

A Detroit Red Wings trainer by the name of Lefty Wilson made further advancements with his creation of the lightest goalie mask possible.  The mask incorporated large eye openings, a slit mouth opening, and increased ventilation to reduce heat build-up. Ernie Higgins, a Boston plumber, followed in Wilson’s footsteps by creating a one-of-a-kind look to his masks; two triangle shaped slits in the cheek and “T” formation holes in the forehead was a design no one had seen before. Word spread and NHL goalies such as Gerry Cheevers and Eddie Johnson endorsed Higgin’s products, making them their preferred mask of choice. These masks were the first design to extend past the ears and forehead, to help protect against concussion and head injuries. Additional padding was also placed in crucial impact areas making the new era of goalie masks more than just a flat shield. By the 1970’s, the traditional goalie mask had a changed persona with Gerry Cheevers and Doug Favell painting or decorating each mask before a game. Cheevers was famously known for drawing stitch marks on his mask every time he would get hit in the face with a puck. The first coloured designed mask was worn by Jim Rutherford of the Pittsburgh Penguins. The end of the 1970’s marked the design era, where 80% of goalies in the NHL would have coloured or pictured designs on their helmets. The mask was no longer just a piece of protection; it was also a piece of art. Intimidation and mystique were key themes that goalies incorporated into their design.

The Goalie Mask of Today

The first “combo” mask/helmet then followed, with Greg Harrison and Dave Dryden combining key safety elements of the hockey helmet with the fit and impact resistance of the fibreglass mask. It featured a front and back piece, where adjustment straps were placed on the back to tighten or loosen to the goalie's preference. The combo design helmet is still worn by pro goalies today, with advances in Kevlar and carbon fibre materials being added.  Players have the opportunity to customize their mask with any specific design to match the team they play for, or feature graphics that have meaning to the individual goalie.

The goalie mask has come a long way and will continue to evolve as companies and manufacturers produce new helmets, designed for protection and performance. Your Source For Sports® goalie specialists will make sure that your helmet not only protects you well, but looks fierce.

Source For Sports, We Know Our Stuff. 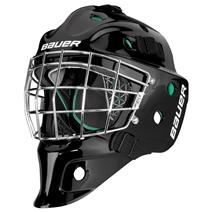 The Warrior Ritual G4’s are like nothing you’ve ever felt on the ice and will help you elevate your game.

How To Choose The Right Goalie Stick

Let’s face it, we all get scored on. The difference between good goalies and great ones is how they respond.

Pro-level goalie equipment without the pro-level prices. Source For Sports has got you covered with our exclusive CCM E-Flex Goalie gear series.

Goalie Parent Story: What Goes Around, Comes Around

When your son or daughter plays goal, it can lead to different stressors as a parent, which can be emotionally draining.

The improvement from the 1S gear to the 2S is pronounced, and brings Bauer’s goalie innovation to an entirely new level.