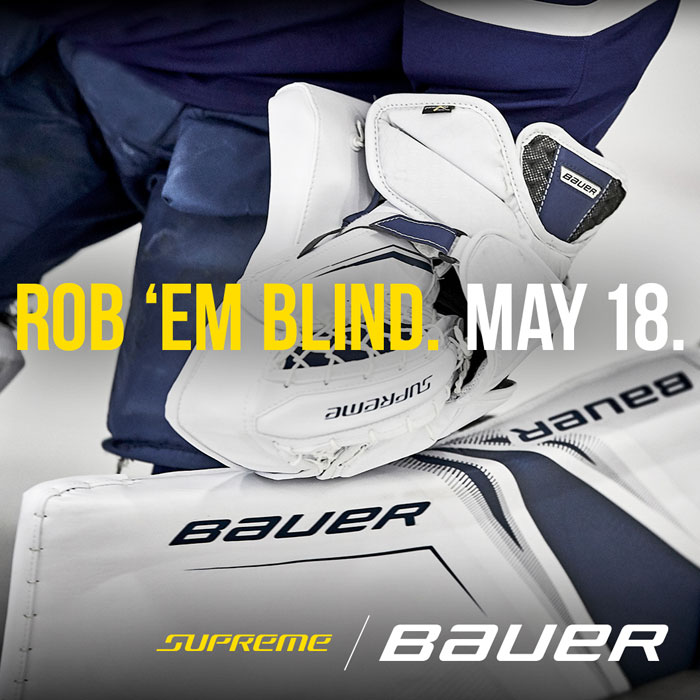 Just over a year ago I started using the Bauer Supreme 1S goal pads, glove, and blocker. Prior to switching to the 1S I had typically used a softer pad with two knee breaks for greater flex (most recently I had been using a set of Reebok P4’s with two internal knee breaks.) Though the 1S gear took me a while to get used to, I quickly fell in love with it and soon couldn’t keep myself from raving about the gear to anyone who would listen. This is why back in November I was so excited to try on the new Bauer Supreme 2S gear at our Source For Sports demo and was even more excited to try them out in a few of my men’s league games. I expected the 2S gear to be more or less the same as my 1S gear with a couple tweaks and adjustments; boy was I wrong.

As soon as I picked up the pads I could feel the reduction in weight from my 1S gear. The thinned-out profile of the Supreme 2S pads is visible as soon as you take them out of the box. The pad is thinner from the boot all the way up to the top of the rise, which is where the new thinner profile becomes most obvious. The new Bauer Supreme 2S pads feature a new top welting, which comes from Bauer’s Vapor 1X gear, and is much thinner than the top of my 1S gear. (Bauer did release redesigned sets of 1S pads with this feature after the original release, but my 1S set features the original design).

From there the next thing I noticed is the new knee and calf design. These areas of the pads have been redesigned to be flatter, producing less friction for even easier sliding in the butterfly. From there I saw that the outside of the boot now C.O.R. Tech ST, which is Bauer’s updated C.O.R. Tech skin. C.O.R. Tech ST is tougher and more durable than the original skin from the 1S and can stand up to multiple seasons of use while still providing the incredible sliding and hard rebounds that the Bauer 1S and 1X pads have become known for. Bauer has also the logos on the pad to be “hot melted” directly to the face of the pads rather than adhering the large Bauer plate logo to the pads like they did with the Supreme 1S pads. These new logos stick out slightly from the pads and make them much more prominent in the pads appearance.

Getting the pads out on the ice I could really feel the differences and similarities the Bauer Supreme 2S goal pads have to their predecessors. The weight reduction on the 2S from the 1S can be felt immediately. Just a small push is all you need to get from one post to the other in your butterfly. The CRS strapping system carried over from the 1S provides a familiar feel and gives the pad a perfect rotation to the ice every time you drop into a butterfly. The CRS toe ties also give your foot a great deal of mobility allowing your pad with its fused stiff boot to stay flush to the ice even if you’re stretching out to make a desperation save. The POWERLITE core with Curv composite the pad keep its shape no matter how you’re moving in your crease and help to produce those hard rebounds to get the puck away from the net.

The Bauer Supreme 2S pads come with both short and long elastic straps for the CRS strapping system. While I personally use all short straps and no on my Supreme 1S and Supreme 2S goal pads, the ability to mix and match these straps means that you can customize your 2S pads to fit and rotate in whatever way you feel most comfortable, hence why it’s called the Custom Rotation System.

With the performance features of these pads (i.e. crazy fast sliding and trampoline-like rebounds) and the customization possibilities (CRS elastic these pads will help anyone improve their game. If you’re a goalie who has traditionally used softer, more traditional pads, don’t dismiss the Bauer Supreme 2S goal pads simply because they don’t fit what you’re used to. Once adjusted to your specs, these pads are easy to get comfortable with, and the benefits they’ll give you are well worth making the transition. Trust me, I know from experience.

The new Bauer Supreme 2S catch glove’s new features are mostly around one area of the glove, the pocket. It has been updated from a Single T on the Supreme 1S glove to a Split T in the new Bauer Supreme 2S glove. The new split T helps pop the glove open to present a massive catching surface in your stance. The new Split T on the Supreme 2S catch glove helps to limit pop-outs by reducing spin on the pucks that hit the T, keeping them safely inside the new maximum-depth pocket. The new 2S catch glove also features the new catch grip pro palm on the interior of the glove. This new material provides extra grip for your hand on the glove even when you’re drenched with sweat, giving you more leverage to snap your glove closed, and keeps the glove from falling off of your hand if you like to wear it loose. Some of the features carried over from the 1S glove include the Free Flex backside for complete wrist mobility when making a glove save or handling the puck, XRD foam in the palm to eliminate stingers, and curve composite in the perimeter to help the glove maintain its shape and eliminate finger curl.

Using the 2S glove I found it to be easier to break in than my 1S glove, and after 2 or 3 ice times I could close it with ease on every shot to my glove side. While I’m not able to snap it open and shut like my 1S glove just yet, the Bauer Supreme 2S glove breaks in quickly so you won’t be catching pucks with your glove open like Henrik Lundqvist. The break angle on the 2S glove is 75 and provides more of a full hand closure rather than a finger to thumb closure. Like the 1S glove, the Supreme 2S catch glove can also be baked in a skate oven to speed up the break-in process. Though I never did this with my 1S, I’ll be doing it with my 2S to see how much it helps break-in and will update this post once I’ve baked it.

Though blockers are typically the most boring piece of equipment to review (except for maybe neck guards or base layer) the new Bauer Supreme 2S blocker has enough innovative features to warrant a great deal of attention. The Supreme 2S blocker features a brand new pro palm with air mesh. This new palm gives the blocker excellent grip and control when holding your stick, and keeps your hand ventilated to keep it just a little bit cooler during those games you’re being peppered with shots.

The Curv composite board in the new Bauer Supreme 2S blocker helps to fire away rebounds with very little effort, and the Free Flex cuff gives you the wrist mobility to angle pucks away from trouble and towards your defenseman.

My favourite feature of the new Bauer Supreme 2S blocker by far be the how light it is. The lightweight foams and materials in the 2S blocker help me move my blocker towards shots faster, and the index finger protection has saved me from an injured index finger more than once from shots riding up my paddle and into my hand.

While I acknowledge I may be somewhat biased here after using and really enjoying my Supreme 1S set, I have to say the performance and feel of the Bauer Supreme 2S goal gear amazing. The improvement from the 1S gear to the 2S is pronounced, and brings Bauer’s goalie innovation to an entirely new level. Everything piece of 2S gear is incredibly light, and the pads and blockers fire off rebounds so hard that you can (and I have) turn your rebounds into breakout passes. I know there are many goalies out there who may overlook the Bauer Supreme 2S gear because they are accustomed to a softer traditional pad and think the 2S pads will be too stiff for their game, I urge you to give the 2S gear a chance. Try them on in store, and if you can find an opportunity to demo this gear on the ice, take it. With the performance benefits and technology packed into the new Bauer Supreme 2S pads, catch glove, and blocker, you will be glad you did.

Visit your local Source For Sports store to check out the new Bauer Supreme 2S goal pads, catch glove, and blocker when they’re released on May 18th, 2018!

Speed is king, and Bauer has created a line of goalie gear designed to get you from goal post to the crease edge faster than ever before.

Source For Sports has worked in collaboration with Bauer to design five Source Exclusive Bauer skate models that include numerous upgrades for a higher quality skate at a lower price.

The Bauer Vapor 1X skate will give you the extra boost of speed to blow past a defender or hustle back to break up a scoring play.

The Bauer Supreme 2S Pro skates are more proof of why Bauer is topping the charts in the hockey skate category.

The Bauer Nexus 2N skates for 2018 are designed to provide ultimate comfort leading to superior performance.

Pro-level goalie equipment without the pro-level prices. Source For Sports has got you covered with our exclusive CCM E-Flex Goalie gear series.

Bauer's Nexus 2N Pro and 2N hockey sticks have a mid-kick flex and a high performance blade to shoot like a pro.